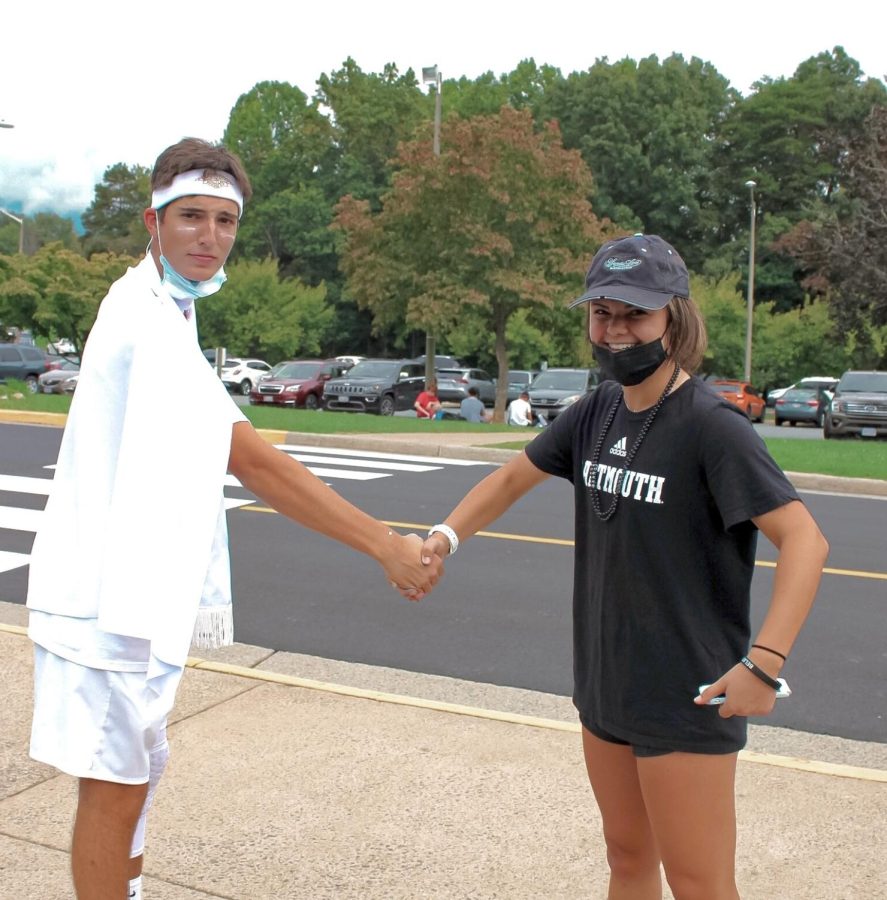 Executive Council President Nicole Bilchick (right) serves as a bridge between administration and students. She will pass her role as EC President to Michael Mitchell (left) for the 2022-2023 school year.

Nicole Bilchick is your typical Western senior, busy and overworked with her in and out of school commitments. Free time is not something that she has a lot of.

Notably, Nicole serves as president of Executive Council (EC), overseeing many aspects of Western’s Leadership program. Bilchick enjoys her busy schedule and sees it as an opportunity for growth.

“Senior fall is tough. College applications, AP course work, extracurriculars – it all adds up. Furthermore, leadership work tends to be front-loaded because Spirit Week is in the first quarter. Although this made for a very busy semester, it was good preparation for college and beyond” said Bilchick.

Aside from running the morning announcements and planning Spirit Week, Nicole has extensive responsibilities as EC President that have only grown since her junior year. She serves as an intermediary between students and administration.

“EC bridges the gap between the student body and administration. We serve as point people, a way for our peers to voice their questions and concerns” said Nicole.

“Most of us have been in the leadership program for the last four years, so we have a lot of experience interacting with new people. It makes us more approachable, especially to new or younger students” she added.

Nicole has long since been interested in leadership and working with others to make a difference on issues that are important to her. Beginning in middle school, Nicole was elected to serve on Henley’s Student Council Association. In 8th grade, she was selected for the Senate Page Leadership Program.

“I basically picked up in the middle of the year and moved to Richmond for two months to work as a page for the VA Senate. This program introduced me to the policy-making process” said Nicole. “Every day, I was surrounded by leaders who took initiative to make a difference. Taking that to heart, I decided to run for elected office (class officer and Executive Council) when I returned to Charlottesville” she added.

Her passion for leadership guided her to Western’s leadership program, where she served as class officer for two years and then rose to executive council.

“I love the EC community. You always have six peers, two leadership teachers, and all of administration by your side. Whether you need concrete guidance or just a friendly chat, there is always someone there to listen” said Nicole.

“Nicole is lots of fun to work with on EC. She has a lot of experience so it’s always great to get her input on new project ideas” said Carly Hegemier, fellow EC member.

Coupling her leadership skills and interest in politics, Nicole plans to study policy in her undergraduate studies. Her time at the Sorenson High School Leaders Program and VA Senate Page Leadership program have confirmed to her that this is her calling.

“Yeah, I honestly have no clue where I will be for college and that’s kinda scary. I applied to over ten different places and hear about all of them at the same time, so it’s going to be a lot at once” said Nicole.

Although Bilchick is not positive about where she will be attending college next year, Nicole is certain that she will continue playing soccer for a club team. As an outside/center back for Western’s Varsity team, she has been a starter since freshman year. She led her team to win the VA 3A State Championship game in 2019 and 2021.

“My favorite part about soccer is the level of competition and the sense of community that comes with it. Everyone is just like you – they want to win.” said Nicole. “In season, you spend all this time playing and bonding with these people who share the same goals (no soccer pun intended)” she added.

In anticipation of graduation and moving past Western, Nicole reflects positively on each of her years.

“When I walked into Western for the first time, I wasn’t sure what to expect. Over the last four years, I have experienced all of the highs and lows that high school has to offer” she said.

“As I prepare to leave, I realize that I learned far more than content from a textbook. I discovered how to lead a team, how to interact with my superiors, and how to handle adversity. Western equipped me with these lessons and more so that I can succeed on my own in the outside world” said Nicole.