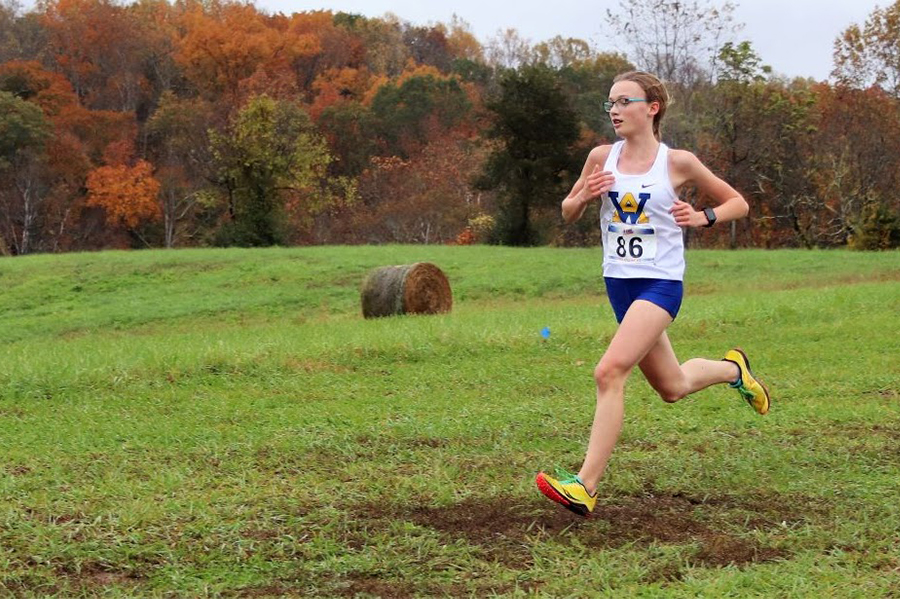 Sadie Adams attributes her determined attitude to her time running for WAHS.

The girls’ cross country team is historically one of Western’s best performing sports teams, winning more awards than any other sport since Western first opened. This year is no different; Western has a brand new prodigy of a runner, Sadie Adams.
As a freshman, she has been running well below a sub-twenty-minute 5K. Adams started her running career at Henley middle school by joining their cross country team and went from there, beginning her first season of WAHS cross country as a middle schooler. Her current PR (personal record) is 17:50. Impressively, she finished third at states and ran the fastest Freshman time in the whole state of Virginia (18:21). Adams has been interviewed by local press for her talents and has been breaking course records at Panorama Farms and other courses left and right.
Cross country is about running against yourself, it is more of a mind game rather than a physical one. The sport has helped Adams cultivate willpower, an important skill to have in life, “It has taught me to be really determined because it takes a lot of determination to go out there and run 8 miles when it is 95 degrees.” While one person could see a sport as competitive as cross country at Western a distraction from schoolwork and homework, “It has made me more determined and motivated… definitely during races, it has been really hard, but overall I just love it.’’ It taught Adams how to be motivated and stay focused even when it seems impossible. “It has definitely helped me in all aspects of my life,” said Adams.
Not only does Adams enjoy the sport, but she also loves the team aspect of it. “I just think that the team helped me stick with it.” When competing in a sport as grueling as cross country it is crucial to come back to a non-friendly environment. One would think that being one of the top runners in the state there would be more pressure, but Adams just has fun with it. “It’s not a super high-pressure thing… I love the team, it’s awesome.”

With all of this in mind, Adams will be breaking records for years to come and will continue to grow as a runner. Being a freshman and only having run cross country for a little over a year, she has quite the potential to do great things for the WAHS cross country team. And even if someone isn’t the top runner there are still things to gain from cross country, many life lessons can be learned from this sport. Any person can run, even Sadie agrees “Yes I would definitely suggest joining cross country it’s super fun”.