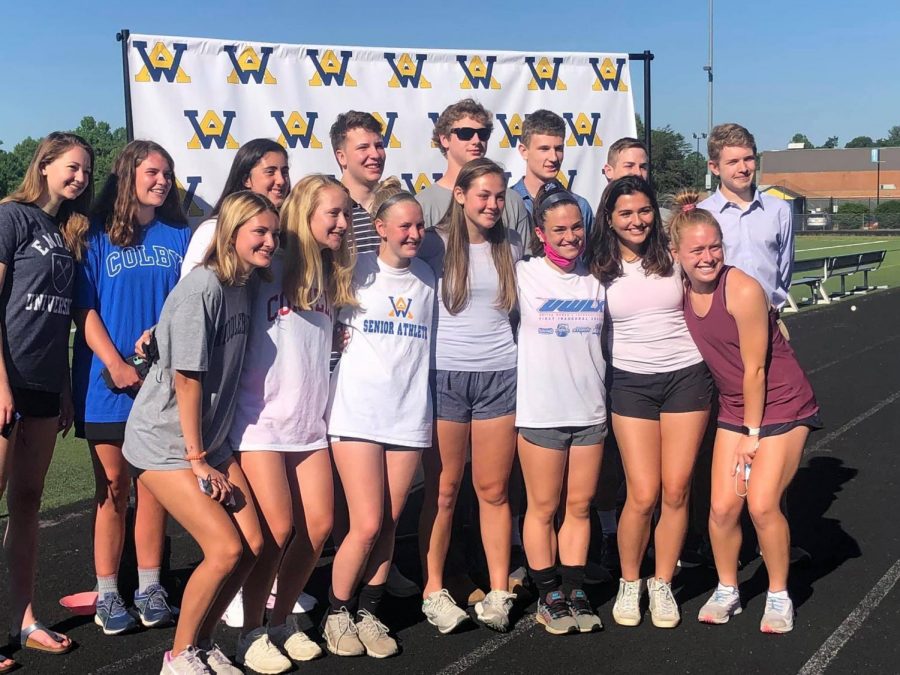 A number of WAHS student athletes plan to continue their sporting lives in college next year. Last week, WAHS held a signing ceremony to celebrate their plans.

Thomas Kallen is a cross country runner who was part of the 2019 cross country Nike national team.  He also was an indoor track All-Region in 2021, coming in 3rd in the 1600 and 2nd in the 3200.  One of Kallen’s favorite memories was “qualifying for the cross country national meet my junior year. That whole experience was so incredible and will be a memory I will carry with me for the rest of my life.”  Kallen will attend Washington and Lee University. He chose the school because “Washington and Lee competes as a Division 3 program which allows me to compete in my sport at a high level while also pursuing a great education and social life.”

Cross country runner Joseph Taylor was also part of the 2019 cross country Nike national team.  He was a state champion in 2021 in the 1600 and all state cross country in 2018 and 2019.  Taylor committed to William and Mary. “I thought I would be a good fit for the team,” he explained. “They have great academics, and I would be able to stay close to home.”

Runner Kate Ratcliffe will attend Middlebury College.  Ratcliffe was  all-state cross country in 2019, all state indoor in 2021 and a state champion in the 3200 in 2021.  Some of her best moments at Western were “running at WAHS was in my sophomore year of high school, when my DMR (Distance Medley Relay) won the entire event at Dogwood.” She committed to Middlebury because “I knew I wanted a school where I would not only enjoy continuing my sport at a higher level, but also enjoy the academics and social life. Middlebury is such a great fit for me.”

Yet another cross country runner is Walter Moak, who will attend Oberlin College. Moak was a Ragged Mountain Cup top 15 finisher in 2021 and indoor track all region in 2021.  Walter loved “competing at the national regional qualifier meet in North Carolina in 2019. I broke 17:00 in the 5k for the first time” which led to them going to the national meets in Oregon.  Moak chose Oberlin because “Oberlin has a great music program, strong liberal arts and cross country and track teams I can run on.”

Swimmer Kathryn Burr is headed to Emory University.  She won 1st place in the 200 yard individual medley in 2019 and 3rd place in 50 yard free in 2021.  One of her best moments “was when the girls’ swim and dive team won states my sophomore year. I was the final leg on the final relay of the meet.”  She chose Emory “because of the perfect combination of environment, academics, and athletics.”

Maddie Shearer is a lacrosse player who played four years on varsity and was a three year starter and led the team in goals scored in 2019.  One of her best memories while playing for western was “making it to the state finals my sophomore year.” She’ll continue to play lacross at Duke University, which she chose “for the great academics and a chance to play against amazing competition in the ACC.”

Senior Libby Carbo played four years on varsity lacrosse and was a three-year starter.  She led the team in points scored in 2019 with 60 goals and 51 assists. “My greatest memory would probably be [the] state final game in 2019,” she said.  “Although we did not win, we fought every second of the game.” Carbo “chose Boston University because … it has amazing academics but also gave me an opportunity to play lacrosse.”

Lacrosse player Stuart Widener was an honorable mention section for All-Region 4A boys lacrosse.  He also won the region championship his sophomore year, which was one of his favorite memories of his time at Western.  Widener will attend Randolph-Macon College.  “I chose RMC because my parents went there, my dad played there, and I have been around RMC pretty much my whole life,” he said.

Trevor Vernon will play baseball next year at Patrick Henry Community College. “A great memory I have with Western baseball is my whole senior year so far. This is the best team I’ve been a part of with this school,” he said. Vernon chosePatrick Henry because Coach Ellis made me feel like I belong there. I think I can become really successful over the next couple of years.”

Kelly Rogers is a soccer player whose favorite memory at Western was “playing a sport at Western would have to be winning States in 2019. It was exciting winning our third straight title.” Rogers chose to attend “Randolph-Macon because it had the educational experience that would suit me best…  Attending Randolph-Macon also gave me the opportunity to continue playing soccer, which is something that is important to me.”

Soccer player Ellie Cox is heading off to Christopher Newport University.  One of her favorite memories from Western “was winning the state championship (twice).”  Cox chose to attend CNU “because I had the opportunity to play soccer at a school that was the right size for my learning preferences.”

Mary Robertson rows for WAHS.  Her favorite memory at Western was rowing at the Stotesbury Cup Regatta in Philadelphia.  She’ll continue on the crew at Michigan State, “because it had everything I wanted in a college like the great academics and sports, and when I went to the campus, I loved it there,” she said.

Other seniors will continue their athletic careers at the next level.  Kate Landis will row at Colby College, and Adelaide Bragaw will row at Cornell University.  Austin Payne will play lacrosse at Randolph-Macon. Maya Kelly will play tennis at Bard College.  Jacob Lively has committed to play baseball at Patrick Henry. Peyton Wray will swim at Colgate University, and Austin Shifflett will play football at Liberty University.