Seniors Trek Through the College Process Amid COVID-19 Confusion 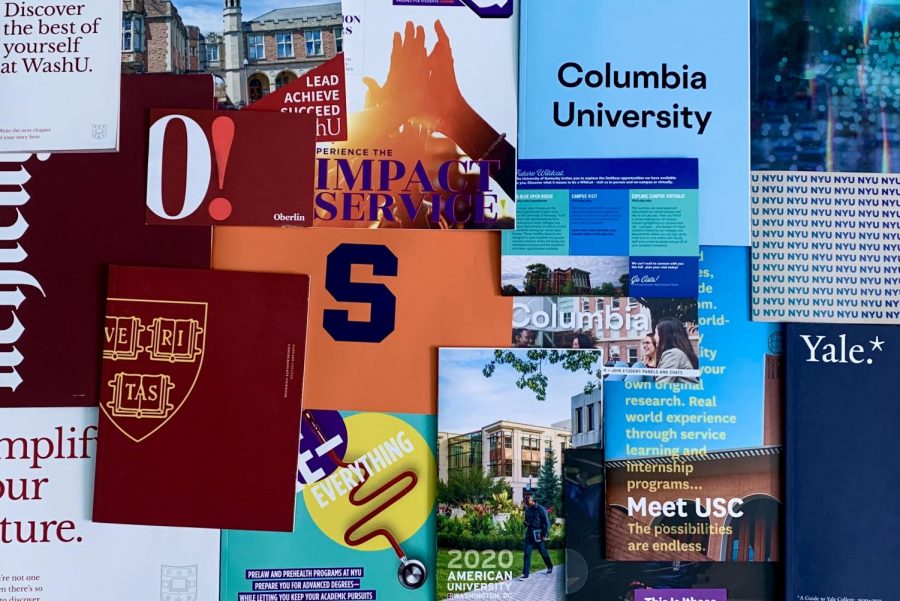 At the forefront of all COVID-related school issues is the confusion surrounding the college process this year, giving seniors yet another problem to deal with. In light of the difficulty students already face, many colleges have already decided to scrap their test requirements such as APs, SATs, and ACTs from the application process. In many cases, students haven’t been able to take their SATs. WAHS is offering a free SAT for juniors to make up for the missed PSATs in January. All things considered, the question remains how the students are handling this and if the virus has actually made it easier or harder to navigate through the college process.

“I had no idea where to start. I felt as if in a normal year counselors would have given us some form of direction, and in this instance, I literally had no idea what I was doing,” said senior Baylee Hughes. “Now, luckily, I was smart enough to, in July or August, say, ‘Okay, I need to get going on this’. And I figured out that I had to create a Common App account. And, you know, I figured out how to do all the Naviance things. But that was definitely very different than I think it would have been in a normal year, or I would have had more support.”

With virtual classes, it’s much more difficult to interact with counselors or teachers just as it is for them to interact with their many students. However, the structure of the process remains fairly similar.

“It was probably about the same in terms of teacher help, because if it was a normal year, I would have just, like, stopped into Ms. Padron’s office during lunch…  I probably reached out to the same people virtually that I would have, like in a normal year,” said Hughes.

Despite numerous universities adopting a test-optional policy, many students worried that not submitting standardized tests scores to certain colleges, typically of lower acceptance rates, would negatively impact their admission decisions. “Part of the reason why I decided to take the test was because Georgetown was ‘test flexible.’ And the bureaucracy of the college is just—I knew that even though they said that we’re not going to penalize you if you don’t submit a test score—I knew in their heart, that they were going to penalize a little bit for not submitting one,” said Kim.

On the other hand, many students were relieved that they had the option not to submit scores and not take standardized tests. The psychological benefits of colleges being test-optional were apparent. “I do think that this test-optional feature has enabled me to be more confident as an applicant than I would have been applying with a test score. I wouldn’t know what type of test score that would be, but in this present situation or the COVID situation colleges going test-optional kind of calmed my nerves, in a sense, that I would be fairly judged whether or not I have a score,” said Kim.

Counselor Olivia Lemay pointed out the new test-optional route many colleges are taking this year and what students are doing about it. “I would say over 50% of my students applied for the test-optional. Since colleges are getting students from so many states and counties and everyone was doing their own thing, they really couldn’t standardize it (grades).” To add to this, LeMay says she “could see the SAT and ACT becoming obsolete” if colleges find that they can successfully go about admissions without these test scores.

Gifted resource teacher Zoe Padron had a similar opinion on this subject. “I think [COVID] may be the death knell for the high-stakes testing of SAT and ACT and I think that is quite good. Those really are cash cows for the college industrial complex and they are not indicative of how students will perform in college.” These changes in the testing requirements could not only affect this year’s seniors but also have implications for the college process in the future. The need for large standardized tests is being put into question by this pandemic, and it’s possible that a lot of colleges could choose to become permanently optional on that front after the virus is cleared.

Padron noted that many students are applying early action attempting to get their information in early, and said that, “for many colleges, that decision last spring has led I think to an overabundance of students getting deferred in early action. Colleges just want to see who else is applying.” On top of this, Padron says that the financial situation overall this year and for coming years will also be a problem. “We have a lot more students who need financial aid this year than we do regularly. The pandemic has really affected families. I think sadly we will see a rise in tuition. The costs of colleges going online last year and this has meant that colleges have had to pay for a lot of increased technology and broadband. It actually is more expensive for schools to go online than it is for them to be in person, which seems counterintuitive but is true.”

This, along with the massive amount of assistance the school has offered students this year, indicates that COVID has indeed changed the process but not necessarily made it more difficult; in some ways, it has made it slightly easier. According to Counseling Director Amy Wright, WAHS has been offering more help than some realize. “I think seniors have done a great job navigating the college application process this year.  Counselors began meeting with seniors in small groups and individually even before the school year officially began!” said Mrs. Wright. “As of February 22, we have processed 1609 college applications via Naviance.  As a comparison, we processed 1413 college applications the entire last year, which had three less students in it.”

COVID has positively impacted students’ motivation and diligence in completing their college applications. Mrs. Wright also identified that the biggest questions students had revolved around the testing system, which became much less of an issue as colleges started removing their requirements.

Among the many aspects of high school that COVID impacted, the looming and notorious college admission process for seniors was exacerbated. However, this stress was mostly caused by uncertainty regarding the changes to the admission process, and it’s apparent that if students seek help from counselors, much of that confusion can be cleared up.