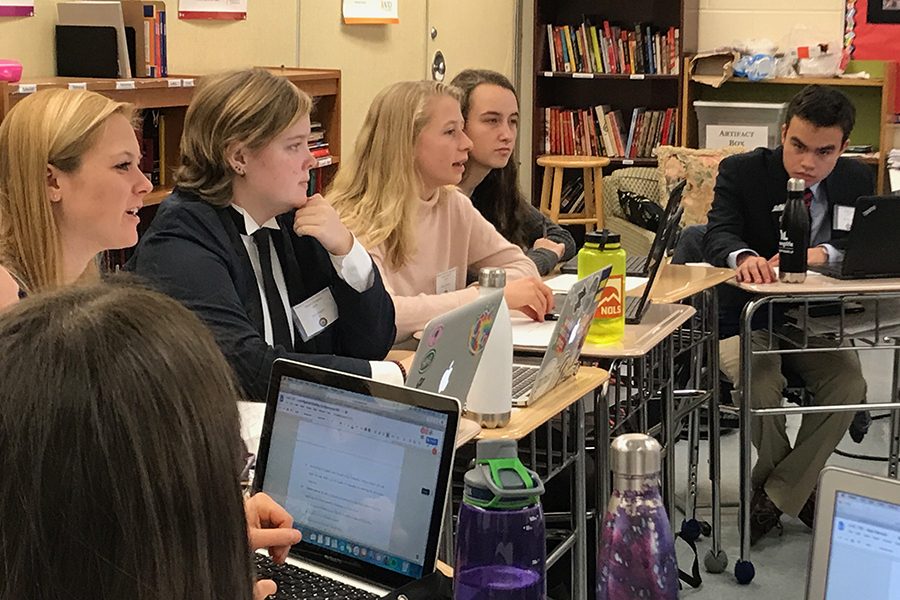 Eleanor Hawkes discusses HB 700, Alex Benson's bill, as Benson looks on. The bill prohibits businesses or companies from discriminating based on sexual orientation or gender identity, and was signed into law by President Bickers later that day

At Model Congress 2018, President Bickers signed six bills into law, as follows: SB 002, increasing federal preschool access; HR 612, allowing the families of deceased soldiers to receive compensation during government shutdowns; HR 506, implementing air pollution regulations; HR 555, reclassifying marijuana as a Schedule 4 drug; HR 101, ending the backlog of untested sexual assault kits; and HB 700, giving federal protection against workplace discrimination based on sexual orientation. Bickers withheld signing two other bills into law to continue more research on them, these being a ban on assault rifles and federal protection of equal pay. He will decide on these bills within the next ten days

Model Congress is an annual event held at Western for all members of the U.S. Government class. During this event, students have the opportunity to formally discuss the aspects of their task: to create a bill and attempt to pass it through the stages of Model Congress and hopefully have it signed by “President” Bickers himself. This event is incredibly complex and requires the assistance of many teachers and students alike. There are multiple committees within both the House and the Senate, and each is filled with a variety of students who have differing viewpoints on the proposed legislation. Here’s a snapshot of the day from our Western Hemisphere staff writers.

The House leadership group convenes in the makerspace behind the WAHS Squad desk. They sit around the table and plan the order of each committee’s bills. It’s a surprisingly complicated process taking many things into account. Based on what issue each bill is discussing, they consider a few factors. Will it be a big debate or an easy pass? Is it a broad issue, or is it very specific to a certain area? If there are multiple bills with the same issue, should they be together or separated? Which should be higher in the order: another veteran bill or an assisted suicide bill?

The group has the power over what is discussed; if they don’t think a bill is as important, they put it at the bottom of the order, making it less likely that the floor session will get to it. They make sure to be fair: their main goal is even distribution and making sure the groups get to the most important bills during the session. They try to vary topics, putting in bills from each party and interspersing bigger and more debatable subjects with easier passes while trying to also incorporate the bills that they deem more important.

The Armed Services committee votes in favor of post-service transportation home for veterans and military dogs. It was noted that both suffer from PTSD and that each helps the other overcome it. The committee fails to pass a resolution regarding relocation of Confederate monuments to museums, potentially because the total cost of removing every stature amounted to $280 million. The committee then passed a bill regarding developing virtual reality simulations to help veterans overcome PTSD by placing them in real-world situations and helping their brains develop ‘triggers’ on how to respond in real life. Concerns were raised over a VR program’s ability to simulate random physical contact, i.e., someone bumping into a PTSD-affected veteran in the mall, but it was assured that the VR program would be in a small room with robotic arms simulating contact.

“All in favor?” asks Riley Stackhouse, chair of the Judiciary Committee. All but two students sitting around the cluster of tables raise their hands in favor of the bill. This is the process that these students would undergo all day, as model congress proceeds through the morning. “Congratulations, you’re moving onto the house,” says Riley.

Next to the floor is Hunter Wood, Republican, presenting a bill regarding automatic capital punishments for mass shootings. Hunter’s bill declares that those accused of mass murders and shootings should be sentenced to death. The opposition of the bill was immediately presented with rhetorical questions such as “doesn’t that become too costly?” or “is an electric chair justifiable?” The diverse opinions and backgrounds of the students bring forth rich discussions that ultimately allow progress to be made among members of the committee. The students finally come to the agreement that Hunter make a change to his bill that says the crimes must be intentional to receive the death sentence. As debate runs dry, Riley asks if the group is ready to vote. The engaged students approve the bill, thereby passing it to the House to be voted on after lunch.

9:15 Luke Tenuta passionately describes his bill. The bill will provide mandatory education for athletes about concussions and will work to prevent them. The funding for this bill comes from the local school district and raised taxes. There will be a trainer at every contact sports practice. Several students question the definition of contact sports. The higher demand for athletic trainers will open job opportunities. Additionally, trainers will collect data and conduct case studies about how many concussions athletes get and how it occurred.

9:30 Emma Schmidtt eagerly proposes her bill. She begins by saying many prescription drugs are not approved by the FDA. Her bill will make it mandatory for all drugs that are sold in the market to be approved by the FDA. The goal is to decrease serious health risks and to protect the American republic. As an attempt to reduce biases, there would be a new branch inside the NIH that would conduct research. Connor O’Dea argues that the investigation would be costly and would lead to a decrease in production of drugs. Schmidt counter-argues that it will hold companies accountable for making higher quality products. After the bill was debated, it passed.

9:50 Abby Zimmerman from the environmental committee introduced a bill to stop animal testing in cosmetics. “This bill is designed so that cosmetic companies can take advantage of new technology instead of taking animal lives.” She explained that the cheaper, more humane option was using human cells to test their reaction to the products. One committee member asked, “If using human cells are cheaper, why don’t companies use them now?” Zimmerman admitted that despite the fact that using human cells was cheaper, it was harder to do. “Pass it! Pass it!” Chanted the committee after she finished.

Judiciary Law Enforcement: Caleb Harris discusses his ideas on how to deal with drug crimes, “….especially for people dealing drugs they end up with more connections to deal drugs. There things that are more effective for treating to stop these things from happening.” He and his peers worked to progress a bill to give the judge the power to decide the reasonable punishment for drug crimes and possible punishment outcomes, such as rehabilitation.

Judiciary Constitutional Affairs: Eleanor Hawkes and Alex Benson discuss passing a bill to prohibit fire or refuse hire based on LGBTQ+ identity. Alex Benson passionately discusses and smoothly answers the questions asked by fellow representatives. After a thorough debate, the bill was passed by an obvious majority vote.

After the previous bill is passed, Sarah Brewster proposes her bill, the “Better Care for Veterans Act.” The bill begins with a suggestion to redesign the online system that allows service members to access medical files through Command Access Card. In addition, the bill states that veterans, as well as their caretakers, will be able to access their medical history, including past procedures and operations. Lastly, the bill explains its goal to provide basic care to veterans such as health and medical care, which are easily treatable. The program will be run by the Department of Veteran Affairs and funding would be provided by private sectors at a lower cost.

Visit the website as the day continues for more updates.

Visit the website as the day continues for more updates.