Mammal of the Month: Walrus 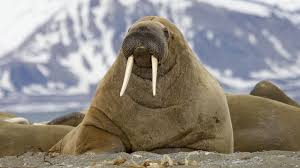 The walrus is truly a majestic creature. They are extremely fat, complete with mustaches and of course, the iconic giant tusks. The Arctic natives put all of these qualities to good use in their frigid habitat.

A walrus’s tusks might be the best and most useful part about them. They have a variety of uses, almost all designed to make their life easier. One use for them is to carve holes in the ice when they want to go fishing. Eating is an important part of a walrus’s life, so it’s crucial that they’re efficient about it. After they see holes in the ice, they dive in and get their food.

However, when they arrive back at the surface, they run into an issue. Their blubbery bodies are too fat to climb out of the water on their own. So what is a walrus to do? Use their tusks! They put them to work once more by getting a solid hold on the ice and using it to slowly haul themselves out of the water, where they then proceed to eat their food. Because of this, they have earned the nickname “tooth-walkers.” If that isn’t impressive enough, the tusks on a walrus can grow to as much as three feet long in their lifetime. They are present on both male walruses, called bulls, and female walruses, called cows.

Walruses also sport amazing mustaches. While they are dashing, they’re for more than just good looks. When searching for food on the ocean floor, they can use tiny feeling devices on their whiskers, called mustacial vibrissae, to detect even the most minuscule meal lurking around them. This is very important, because the walrus feeds very close to the ocean floor, where the waters are often murky.

However, the walrus’s bag of tricks is far from empty. They have also been known to suck up mouthfuls of water and blow powerful jets at the ocean floor. Similar to the ways of a power washer, the walrus unearths burrowing mollusks and other food that may be trying to hide. Another method is to rapidly wave their flippers toward the ground to move dirt around. They must rely on their mustaches, flippers, and mouths to detect and gather their meals.

So, with all this tricked-out hunting gear, what do walruses eat? As it turns out, it depends on the variety of walrus. The most common diet is one of mainly mollusks and smaller sea animals. These may include clams, crustaceans, sea cucumbers, and undersea worms, to name a few. An adult walrus may consume as many as 6,000 clams in one sitting, making up 3-6% of their body weight. Eating 6,000 crustaceans takes a long time. Even for a walrus. In order to save time, walruses tend to skip the chewing step in eating, although they will crush big or hard shells.

The elegant, wonderful walrus has adapted to every challenge that mother nature has thrown at it, and has therefore earned its spot as mammal of the month.